Who schedules a conference at the end of the month, let alone the end of the quarter? Digium, that's who. Last week was crazy. I'm still playing a little bit of catch-up after being out of the office last week to attend Digium's annual users conference for Asterisk developers, integrators, resellers, and customers called Astricon. Luckily enough it was in our own backyard at the Westgate complex in Glendale, Arizona.

As the Digium Partner of the Year in the United States for both 2015 and 2016 we have the pleasure of serving on Digium's Partner Advisory Council (along with other top reseller partners from around the country). It's refreshing to hear and provide feedback directly to executives who take what me and my partner colleagues have to say seriously. So right off the bat a huge thank you Digium for allowing us to continue to be a part of that forum.

We met with some great companies in the exhibit hall. I attended so many amazing sessions. Open source billing platforms. The best strategies for PR and Social media. Securing your SIP and VoIP infrastructure. The sessions run the gammut from business related to super geeky and technical. If you're in telecom there really is something for everyone.

One of the best sessions that got my wheels turning was the Day 2 keynote by Citrix's Director of IoT Engineering Chris Matthieu. (He's a great twitter follow, too.) Two things in his presentation hit me pretty hard. The first was the idea that the Internet of Things (IoT) will be bigger than the Industrial Revolution. And I think he's right. It's my opinion that we are on the precipice of what might be called the "Machine Revolution". Machines are better at learning and opening themselves up (through APIs) to communicate with with other machines better and faster than ever before. Products aren't built with an API as an afterthought, the product itself might be an API. This allows for integration to be done in a snap. (Now whether or not that integration is useful is another story.)

Then I started to look at the reports available online. If IoT industry data holds up then that means we will be adding IoT devices at a rate of 91k every minute through 2020. With about $1.2 Trillion dollars spent on IoT per year. These are staggering numbers. Yes, these are forecasts, but I believe they'll hold up. So get ready because the Machine Revolution is happening, and it may or may not be televised. If it is, you're more likely to stream it on your favorite device.

The other item that stuck out was the notion illustrated in the slide below. "Robots want to communicate; however, they speak infinitely more languages (protocols) than humans." 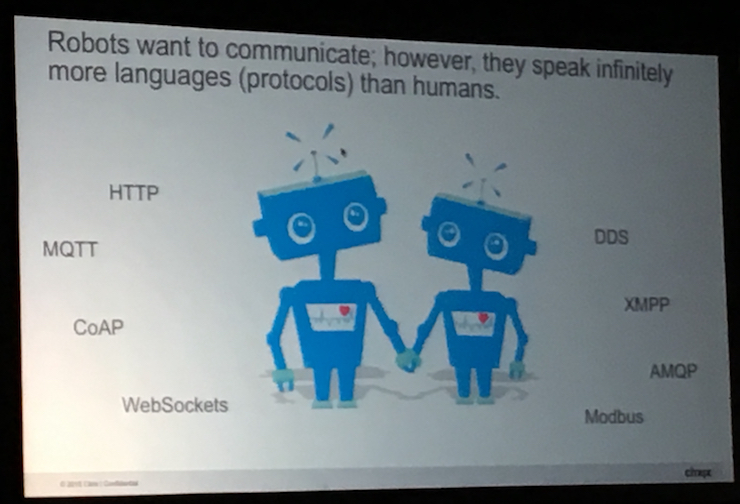 I have a prime (pun intended) example of this. I was given an Amazon Echo last year. At first I wasn't sure if I needed this in my life. Another music player? I already had Apple TV everywhere and could listen throughout my home. My kids were the first to embrace it. They love than they can make Alexa play Beatles music.

But it's way more than a simple music player. As the platform has been developed, I've done some integrations around my home with lighting and landscaping. But that said, they're not perfect. They only work some of the time and it's not easy to set them up in the first place. It is getting better though. New devices and skills are added to the Echo all the time. I can now order an Uber or change my Nest thermostat. But I still can't communicate with my Blossom sprinkler controller to ask Alexa to water the lawn. I know that eventually it'll get there. As a developer of web products and APIs I know that it might take a while for a small shop like Blossom to build that support into their product. Eventually they'll find some common ground.

There are so many ideas and projects happening in the technology space that I think sometimes we take the gravity of what's happening for granted. We all have our own agendas and it's hard to appreciate what other people are making a reality in their own world. Events like Astricon allow a small peak inside those worlds. It's an exciting time to be alive.

Why do we dial telephone numbers? Have you ever thought about it? Probably not. It's something that's always been there and most people take them for granted. And telephone numbers all started because

Apple removed the headphone jack from the latest iPhone... Oh no! Say it isn't so! I only care a little bit about this news. I do really enjoy a wired connection. Call me