I had the pleasure to be one of 20 people chosen to present at Ignite Phoenix: Music on October 28th. This was the second Ignite event that I've been chosen to speak at and it's always so much fun.

So what is it? I can't say it better than the Ignite Phoenix Website so here's the copy and paste version: "Ignite Phoenix is a community of people who love sharing ideas, experiences, and passions with each other. A few times each year, the community convenes at an Ignite Phoenix event, which features 5-minute lightning-style presentations from people around the Valley. The topics range from creative to cerebral to motivational to technical and everything in between, but they all have one thing in common: passion. When you walk away at the end of the night, you’re sure to be exhilarated, enlightened, moved, and inspired to look at the world in a whole new light."

So in a nutshell you get 5 minutes, 20 slides, 15 seconds per slide to present on a topic you're passionate about.

The title of my talk was: "The Album That Changed The World". Which is vague. I know that. I wanted that. No one (except for me and my coach) knew what that album was until I presented it live. And if I'm being completely honest, I'm not too terribly passionate about this particular album. Don't get me wrong, I do feel like it was an important time in my life, and it did have an impact on me. But it's not my favorite record that I want to listen to over and over again. But I do love this album and specifically the first track. And since the world was celebrating the 25th anniversary of its release it got me thinking about that time in my life and how it made me feel. And that's why I chose to submit on this subject. I wanted to take people back to a time not so long ago where the way we bought and consumed music was much different. I am passionate about nostalgia and how people feel when they remember experiences from "back in the day".

Both times I've submitted to Ignite, I've been chosen to participate. And both times, a small part of me hoped that I wouldn't get picked. But alas, here we are... Here's my official submission:

Biography: As an impressionable teenager when this album was released it had a profound impact on the world around me. My friends. Television. The clothes we wore. It made us ask questions and made it OK to express your feelings through music. It inspired me to pick up a guitar and write songs. I still feel the impact when I listen to this album.

Description: Every generation has one. An artist that changes not only the musical landscape but the cultural landscape as well. And not just temporarily, but forever changing our lives. We’ll look at the single album that had an undeniable impact on the entire world. What was supposed to sell less than 50,000 copies has sold over 30 Million copies worldwide. Rolling Stone has said, “No album in recent history had such an overpowering impact on a generation.”

A very special thanks to Devon Christopher Adaams for the photo featured above, as well as the other outstanding photogs who snapped images that night. For more photos please enjoy the Ignite Phoenix flickr feed.

H/T to Sandy Wasserman for sending me the video he took of my presentation. Yeah it's wobbly and it's not the best but I'm thankful he captured it.

So without further ado, here it is, "The Album That Changed The World": 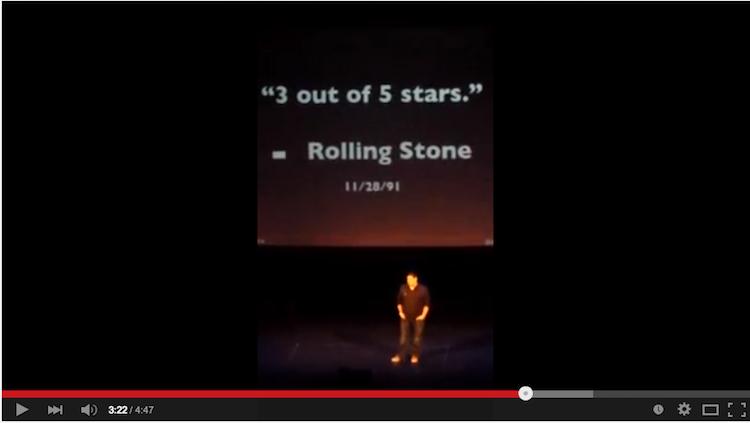 In observance of Veteran's Day on Friday, November 11th, our office will be closed. America's flag stands strong, firm, and beautiful because of the enormous efforts and innumerable sacrifices made by each one

Why do we dial telephone numbers? Have you ever thought about it? Probably not. It's something that's always been there and most people take them for granted. And telephone numbers all started because